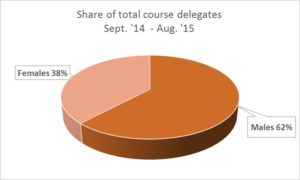 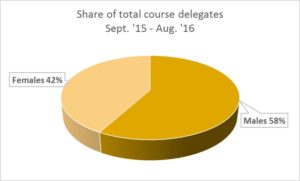 Has the ‘Shine Theory’ crossed the Atlantic?

The ‘Shine Theory’ suggests that women can appear to ‘shine’ more when in the proximity of other successful women. Rather than seeing these females as rivals, it’s beneficial to team up with them.

So Ladies don’t claw your way to the top …. work together.

The term is frequently used by US podcast hosts Ann Friedman and Aminatou Sow.  Ms Friedman¹ makes the point that it is much more advantageous to support your female colleagues than to compete enviously for recognition, praise and career advancement.

Even if this theory is not scientifically proven, it is interesting to observe……..

In the US Senate, the current President has surrounded himself with an increased number of women aides in his second term – when he took office his cabinet was overwhelmingly male. Female officials report the use of ‘amplification’ – repeating each other’s suggestions to ensure that they are being heard and crediting one another to prevent others claiming the ideas as their own – to influence decision-making. The amplification strategy is linked to the ‘Shine Theory’².

Theresa May’s Government, has a cabinet where women constitute a third of ministers. For the first time in our political history, women now hold half of the so-called Great Offices of State. So the dynamics in their meetings must be fascinating ……

Impellus, one of the UK’s leading Institute of Leadership and Management (ILM) approved training providers, reports that the ‘Shine Theory’ is often apparent during group exercises on its courses. On the occasions when a delegate table (typically seating 6 people) is fully occupied by female managers, their participation and contribution is very collaborative and supportive. However, where there are mixed tables, the females become much more competitive overall – not just with their male counterparts but with the other women on the table as well.

What do you see in the workplace?

In roles and industries dominated by men, women can be hesitant to voice ideas and thoughts and may feel daunted. Having the support of other females helps to grow friendships and confidence. The ‘Shine Theory’ suggests that people are often judged by the company they keep and that success breeds success.

No, not a new word puzzle – but a valuable motivational tool in a manager’s armoury

When managing and appraising performance, it’s really helpful to understand what drives each individual member of your team.

You may well be motivated by the carrot. However, it’s unlikely that all your line reports will be the same. The stick will drive others …..

If you thrive on the ‘towards’ principle and use this to engage with a colleague who is motivated by ‘away’, you’ll get frustrated with the lack of action. Likewise your colleague who is driven by ‘avoidance’ rather than ‘gaining benefits’ will get disgruntled at your lack of empathy.

And don’t make the common mistake of thinking that all successful, positive individuals are motivated by the same things.

If we consider two very successful entrepreneurs, Sir Richard Branson and Lord Alan Sugar – the former is predominantly motivated by ‘towards’ being the first to try many business ventures and taking lots risks personally in global adventures.

Lord Alan Sugar on the other hand, has been driven by the ‘away’ principle – wanting to get away from his poor upbringing and have a better lifestyle initially and then from competitive companies/ products to maintain his edge.

Understanding the different drivers behind the carrot or stick approach will help you to unlock the secret of leveraging performance and enable the desired behaviours to be achieved.

Tony Robbins, life coach and author, gives an insight to this motivational technique in his book entitled ‘Unlimited Power: The New Science of Personal Achievement, as follows:

“All human behaviour revolves around the urge to gain pleasure or avoid pain.”

What you gain from getting this right

Spending time analysing ‘towards’ and ‘away from’ behaviours gives you and your team:

The ‘carrot or stick’ principle is covered in more detail in NLP Meta-Programs which form the basis of several of the Impellus management training courses.

This week two young GB Paralympians will return to school after excelling at Rio 2016. They were both inspired to overcome their disabilities and enter competitive sport by watching their idols during London 2012.

Hannah Cockcroft was unbeaten in her T34 wheelchair field for seven years until she came up against Kare Adenegan in London last September.

Hannah’s shock defeat gave her (in her words) the kick up the backside that she needed ensure she trained harder for Rio 2016.

Going into the September 2015 race, Hannah acknowledges that she took it for granted she would keep winning. In Rio Hannah won all three of her races and fifteen year old Kare followed closely behind with one silver plus two bronze medals.

Ellie Robinson took up swimming after her namesake, Ellie Simmonds, became a medal winner and an ambassador for disability sport. Ellie Robinson competed several times alongside Ellie Simmonds and other world champions bringing home a gold and bronze medal.

How do you get your team to feel the energy and passion that Ellie R and Kare felt when watching London 2012?  Do you get on with your day job and take it for granted that you will stay ahead of the game?

Although Ellie Simmonds and Hannah Cockcroft are not ready to hand over their batons yet, leadership succession planning is clearly already in hand within Team GB to maintain world championship status when the time comes.

The questions this begs of you

Who’s coming up behind you and who’s ready to succeed in your position when you’re promoted? Are your leadership skills helping you put plans in place to ensure a competitor doesn’t steal that lead?

If you have nobody coming up behind you to kick your backside from below and make your team succeed, are you going to have your backside kicked from some other place which will hurt you far more?

Our Organisational Leadership Skills and Managing Performance and Efficiency training courses equip managers with tools and skills for succession planning.

If you are holding the fort while others are away on holiday in August it can be frustrating that everyone you contact is away, decisions can’t be made and everything seems to slow down.  But just as in the natural pause around Christmas time, it is as well to embrace the quiet period that happens in August.

So what can a business leader do to make best use of this time?  Rather than turning into a ball of frustration, why not take time out, break your own habits and do something different?  Here’s some suggestions: END_OF_DOCUMENT_TOKEN_TO_BE_REPLACED

It is remarkably common for businesses to organise an event or plan a process and find at the last minute that a major factor has been forgotten or missed in the planning process.  We all recognise that moment when people stand and stare, and think “oh how did we miss that!”.  Thorough planning involves more than a quick 5-minute meeting and a “let’s get on with it” rallying cry.  And yet when you are sitting in a room making decisions it is easy to miss those finer points unless you have a process to follow which will flush them out.

So how can you avoid this scenario? END_OF_DOCUMENT_TOKEN_TO_BE_REPLACED

Management theory is normally developed around commercial organisations leaving the charity sector to interpret it to their own needs. But some charities are large organisations with many staff to manage, and they too can benefit from some of the lessons of good management thinking.

Recent discussions with people running High Street charity shops highlighted to me the different challenges that they face from the commercial sector.  Our view of the charity shop may be of a slightly messy down-at-the heel retail space, but for the charity it is often a major source of income, and with other income streams becoming ever tighter, there is greater pressure on making the shops a successful venture.  However, the charity shop is likely to be largely staffed by volunteers coming from all walks of life, and you probably can’t be too choosy about who you take on. END_OF_DOCUMENT_TOKEN_TO_BE_REPLACED

An inclusive culture can be a powerful thing in a business.

Involving people more – what effect can it have?

Involve young staff when visitors come round – ask them to talk to the visitor.  Give an opportunity to a junior person to visit a client, partner or a supplier.

What’s the message you are giving off to that employee? END_OF_DOCUMENT_TOKEN_TO_BE_REPLACED

Within the business community it is at last becoming widely recognised that if you want higher performance from your staff you have to win over their hearts and minds.  There is a greater understanding that people give more when their attitude to work changes from “somewhere I go to earn money” to “a place where I can achieve my dreams and aspirations”.

But how do you do this?  Employee engagement can seem complicated to achieve and every office has its politics and reasons or excuses why staff engagement is low and why it may be difficult to improve it.

But if you truly believe that your company will be a better and more profitable institution if you improve employee engagement then there really isn’t any excuse for not trying.  So you have to start somewhere – right? END_OF_DOCUMENT_TOKEN_TO_BE_REPLACED

In our post-Brexit world we are starting to see occurrences of divisive behaviours.  Social media has been the platform for a considerable amount of  abusive behaviour in the last few days.  The vote was 52% to 48%, so in most companies with any significant number of staff there is likely to be a roughly equal split in the way the workforce voted.  Leave voters may be behaving triumphantly, Remain voters feeling sad and betrayed, and everyone is watching the financial markets and wondering how long and deep the recession will be.

The less-sensitive amongst your staff from either camp may inflame the situation by making sweeping provocative statements.  END_OF_DOCUMENT_TOKEN_TO_BE_REPLACED

The course was well structured and presented in an engaging, interactive manner. It was most useful in helping me to understand my leadership style and how to tweak this moving forward for greater success.