We note with interest that Zappos, a US online retailer of footwear owned by Amazon, is to embrace ‘holocracy’. Holocracy is a management ideal which suggests that everybody is co-dependent, teams are overlapping circles, and that happy workers breed happy customers. 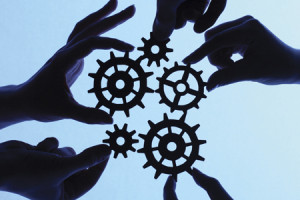 Holocracy as a management concept isn’t new, the term was first coined in 2007, but this coverage gives it exposure. Other businesses, organisations and consultancy groups have made claims to latest and greatest management methods in the past. Toyota shared lean manufacturing and GE its Six Sigma efficiency model. Quality was every consultant’s byword in the nineties, we’ve had the Spaghetti Organisation (honestly) and IBM are experimenting with ‘agile management’ in an attempt to be more like the lean start-ups of Silicon Valley.

So should you adopt the latest thing? Julian Birkinshaw of London Business School has studied management ideas and says that ‘Nine-tenths of the approximately 100 branded management ideas I’ve studied lost their popularity within a decade or so’. He also notes that even Google and its once-lauded “20% time” idea, where staff were given one day a week to work on projects, is quietly being sidelined.

Birkinshaw concludes that there’s no one-size fits all management ideal and it pays to at least be sceptical of ‘latest techniques’. Improving the core leadership skills of managers so they can provide the ability to adapt management and cultural norms to fit a department or organisation’s goals are the long-term keys to organisational success.

Before we start talking about strategy, shouldn’t we agree on what ‘strategy’ actually means?

During the course of our leadership training programmes we often use words such as strategy, vision, mission and values. What becomes very clear for delegates is that there’s often conflicting views as to what each of these words means and how managers and organisation think about them.

Particularly so with ‘strategy’.

So what is strategy? What does it give us? In 600bc Sun Tzu said “Strategy without tactics is the slowest route to victory. Tactics without strategy is the noise before defeat”. This perhaps gives us part of the answer; that is that strategy is the notion of doing things that should dictate the daily details of getting work done and shipped. It’s the way in which we are to reach the overriding goal or vision of the organisation.

In Richard Rumelts’ book Good Strategy, Bad Strategy he argues that strategy is the identification of problems, forces, risks and environmental effects that you will meet on the way to achieving your goals, and then choosing to do something about each and every one of them.

Thus ‘We want to be an £X million turnover organisation’, is not a strategy. It’s an objective. Strategy is precisely how you’re going to do it and get people to work with you.

So with that agreed, what’s your strategy? Does everybody agree?

Your Vision, Mission and Values are an integral part of your strategy. Not your sales message.

This week has seen the publication of the Francis Report which chronicles the appalling neglect of patients at Stafford Hospital between 2005 and 2009 resulting in the unnecessary deaths of up to 1,200 patients. In his report Robert Francis QC describes how patients were left ‘unwashed, unfed and without water’ while staff treated them and their relatives with ‘callous indifference’. He goes on to say that ‘there was a lack of care, compassion, humanity and leadership’.

The Francis report talks about a culture with many negative aspects including:

The Mid Staffordshire NHS Foundation Trust website contains the following wording:
‘Our Vision is to be recognised as the safest and most caring Trust in the NHS’ by among other things, ‘Creating a culture of caring’ and ‘Listening, responding and acting on what our patients and community are telling us’.

The problem with Vision, Mission and Values statements is they’re often stuffed with hyperbole for the benefit of the outside world and subsequently forgotten by the leaders and managers of an organisation. This is not the purpose of identifying them in the first place. The Staffordshire NHS case is an extreme example of getting it wrong made all the more painful by the fact that the mistakes were funded by the taxpayer.

It’s OK for your values to say we’re cheap, basic, minimum standard if that’s what you’re perpetrating. If Poundland have a values statement I doubt it says a huge amount about ‘ultimate retail experience’. A Vision, Mission and Values statement must be honest and internal – it’s your strategy not your sales message.

Sir Terry Leahy, the man who built Tescos into a worldwide retailing giant says he spent 14 years repeating their values over and over again at every meeting, staff talk and opportunity. He claims, “Looking back, of all the things I did, communicating our values and strategy had perhaps the greatest effect”.

The coaching exercises were really useful - both in terms of learning how to coach back in the office but also for personal improvement. I enjoyed discussing GROW questions and how to open these up.